A SPECIAL CASE: Gap breaks from education can be taken at different times. Thomas Howell, 10 years old with Autism and Cerebral Palsy, volunteered with Projects Abroad on a care project in Sri Lanka, accompanied by his mother Suzannah, who records their experiences. 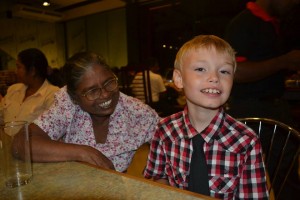 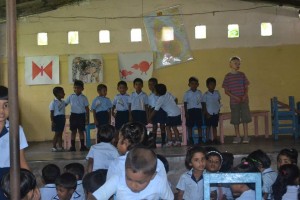 Thomas’s disability and how it affects his everyday life:
Thomas was born eight weeks premature with a right sided bleed on his brain.  This has caused a number of difficulties, including a weakness down his left side and severe learning delay.  Aged five Thomas was diagnosed with Autism.  He has problems walking distances and needs help with day to day activities as he doesn’t use his left arm at all.

Why I wanted to volunteer with Thomas:
Two years ago I decided to do something different with Thomas during the summer holidays.  Rather than paying for childcare, we could do something worthwhile in the six week break.  My first thought was to do something in this country. After discussing it with family and Thomas’s school, I thought it would be the perfect opportunity for us to experience another country. 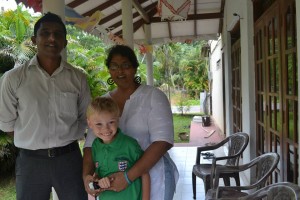 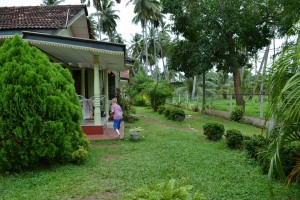 The story of our placement in Sri Lanka:
The planning started in the January. I contacted several organisations for advice.  The initial responses were negative, saying that they had no experience of this kind of challenge, and could not offer support. I then emailed organisations that plan volunteering placements. Eventually I received a positive response from Projects Abroad, who were very supportive and helped us find the right placement.

Our placement was in a pre-school with children aged 3-5.  We took supplies from the UK, such as words and number games and flash cards.  We were in school 8am-12.30pm Monday to Friday.  Our role was to help children with their English, and oversee arts and craft activities.  We went on school trips.  If the weather was good in the afternoon, we would often take a tuk-tuk to a nearby hotel to use the swimming pool, or meet up with other volunteers. 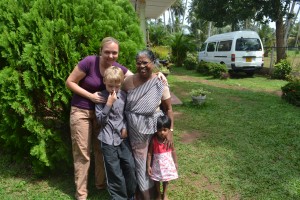 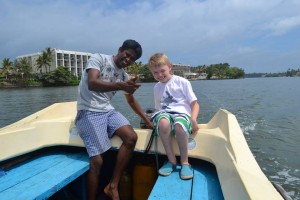 In the third and fourth weeks the school was on summer break.  Our host helped us organise travelling around Sri Lanka, mapping places to visit and where to stay. We travelled north to the ancient temples of Polonnaruwa and Anuradhapura.  The second week we travelled along the south coast, our first stop was Tissamahrama where we saw a Buddhist festival taking place.  We visited Yala National Park, and did a safari.  The rest of the week we visited Galle, and then enjoyed a bit of luxury for three nights in a hotel in Bentota.

How Thomas’s disability was accommodated by our volunteer organization:
It took a lot of correspondence to find exactly the right placement for Thomas.  Every single aspect of his condition was taken into consideration, including his behaviour, his likes and dislikes, and his diet. I am so grateful to Projects Abroad for matching us with this placement. 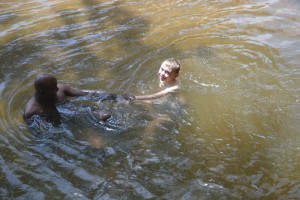 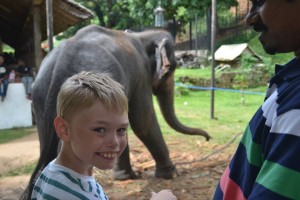 We were placed with Malike, who was a wonderful host.  She was the Principal of the pre-school we worked at, and lived nearby.  Her sons and their families welcomed us and made us feel like a part of their family. Thomas often played with Malike’s grandchildren; they formed a firm bond.

The way Thomas’s disability was treated by the local community:
I found it strange at first how open Sri Lankans tended to be.  In town, they would approach us and ask what was wrong with Thomas.  Sometimes they would stroke his arm and ask why it didn’t work. When I realised they weren’t being rude, just intrigued, it didn’t bother me as much. 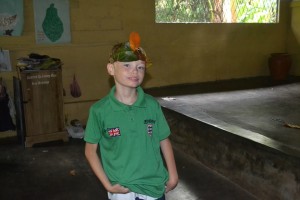 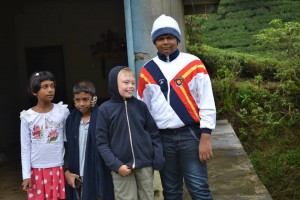 My advice to others who have disabilities:
Preparing a child with Autism for a huge change is so important. Thomas’s school were great, and started discussing it with him a couple of weeks before we left, and made up social stories for us to read and take away with us.

Thomas has gained so much from this experience, and I am grateful that I didn’t let the negative initial response put me off.  Every child should have the opportunity to experience other countries and cultures in this way. 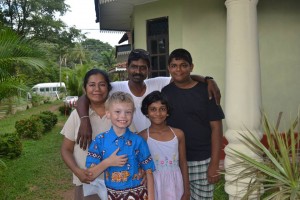 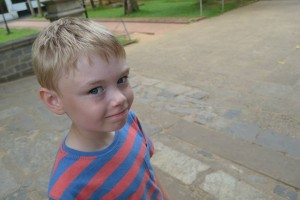 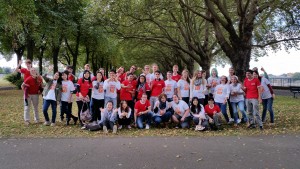 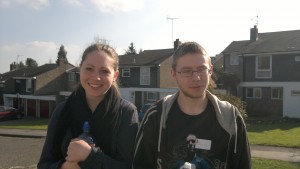 My disability and how it affects my everyday life
Due to deprivation of oxygen after being born 3 months premature, I have a form of Cerebral Palsy known as Diaplegia.  This is a neurological condition that causes tightness in my muscles and affects my balance and mobility.  My walking is slower than average and I get tired more quickly.  Certain conditions can be tricky such as snow / steep hills or up and down stairs without a handrail.

Why I wanted to be a gap year volunteer
I had done some short term volunteering before with learning disabilities and a communication group for stroke survivors.  I found it rewarding and a good learning experience for the type of therapeutic support work that I wanted to do after my Psychology degree.  After graduating, I realised that some longer term work experience would be valuable, and would contribute towards securing a full-time job. 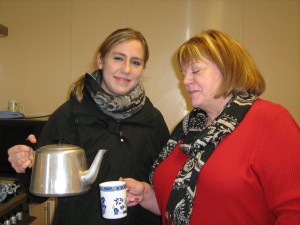 The story of my gap year
A few weeks after my final exams I filled in the online application form for CSV and was invited to an Open Day.   Here I found out about the range of full-time UK-based projects and had an informal interview so that my interests and skills could be matched with suitable projects.  I was sent information about potential placements by email but there was no pressure to accept one straight away.

From applying online to being placed on a project took less than a month. I worked in a residential property as part of Haringey Young Adults Team (Social Services), supporting young people to gain independent living skills, and preparing them for leaving care and moving to their own accommodation.  I lived with the young people and supported them with issues such as getting back into education or learning to cook and manage their money.  I was also responsible for maintaining the house, dealing with repairs, testing fire alarms, encouraging cleaning and doing room checks.   When I wasn’t at the house I spent time at the team office updating paperwork, doing admin or helping colleagues organise events.

I found this very challenging as it was a completely new role in an unfamiliar location.  I had a lot of responsibility living on my own with the young people.  However, everyone I worked with was friendly and supportive. CSV provided regular review meetings and were a helpful mediator if I had problems to discuss before approaching my Manager. I came away with a lot of experiences that have helped me apply for jobs, and the opportunity to live in London for a year. 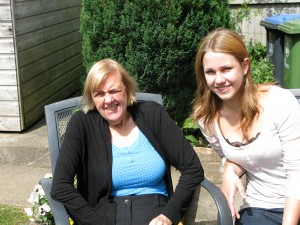 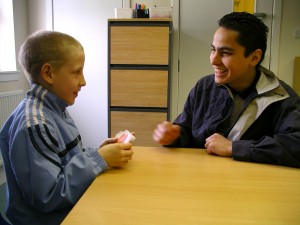 The way my disability was treated on the project
CSV were helpful in taking on board my goals and anything I might find difficult such as providing personal care for others.  My Manager was understanding about aspects of the role I might struggle with, such as helping young people move their things into their room or changing a high light bulb.

I didn’t feel the young people treated me differently because of my disability.  I experienced the same positive and negative reactions that any social worker would have to deal with as part of their job.   I was able to get their help if I needed to move something heavy (usually with the reaction that a nagging parent might receive).  I saw this as a pretty good sign that they were aware of my disability but equally aware of my job role! 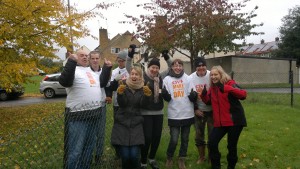 Advice to other people with disabilities
Have confidence in your ability to achieve your goals and don’t be afraid to try something new and challenging.  It can be daunting at first but you’ll be amazed at the things you can learn and experience.  Don’t be afraid to discuss alternative ways of doing things with others, especially if it means you can be confident in what you are doing. 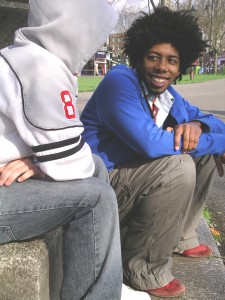 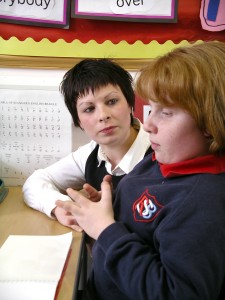 We were unable to obtain photographs of Emma Walton’s own gap year project.  These are from other people working with Community Service Volunteers (CSV).